Our campers attend daily instructional activities based on their own interest, often with similarly inclined cabin mates. Cabin groups gather up for meals, spend rest period together, and will often enjoy a Cabin Night or similar bonding evening time.

With Meg and Peter's guidance, counselors work prior to camper arrival and throughout the session to create a warm, welcoming and inclusive cabin environment.

Cabin activities may include a swim at rest period, campfires and s’mores, crafts, games, and more on Cabin Night, puddle-jumping when the weather and mood are just right, or mellow “downtime” in the cabin.

Prior to the camp session, staff get to know their campers “on paper,” and then connect with each child upon arrival at Hidden Valley. We call parents with a first-week update.

Cabins eat meals as a group, and enjoy rest period and other special times together as well. Meg and Peter meet regularly with counselors (3-4 staff per cabin) to monitor the progress of their cabin communities.

“It is clear that the environment you foster really supports the development of close friendships, and a tremendous warmth among the whole cabin group.” - HVC Parent

Avalon
Built in: 1998
Official initials: AV
Named after: A legendary island from the tales of King Arthur and the Knights of the Round Table. Arthur was taken to Avalon to recover from wounds. It is also the place where King Arthur's sword, Excalibur was forged.

Bermuda Triangle
Built in: 1978
Upgraded in: 2008
Official initials: BT
Named after: The place all the lost socks go after laundry day.

The Burrow... Formally Ritz Down
Built in: 1983
Upgraded in: 1997
Official Initials: BUR
Named After: The Burrow came into existence in 2010 when Peter issued a formal permit for a name change to the campers in the cabin formally known as Ritz Down. After signing the documents a new sign was made and the cabin officially became The Burrow.

Camelot
Built in: 1984
Upgraded in: 2000
Official initials: C
Named after: Built during the camp's Utopian phase. Camelot was the castle from the tales of King Arthur and the Knights of the Round Table.

Chateau Fiasco
Built in: Unknown...
Upgraded in: 1999
Official initials: CF
Named after: A lovely place in Big Sur where Peter and Meg stayed a long time ago. (In 2022, HVA will live here to be closer to main camp.)

Deer Meadows
Built in: 1847
Upgraded in: 2008
Official initials: DM
Named after: The huge 7 acre front yard, winter home to grazing Bambis. (In 2022, HV Community will live here to be closer to main camp.)

Down Under
Built in: 1983-1997
Upgraded in: 2006
Official initials: DU
Named after: Inspired by our Aussie and Kiwi counselors and the fact it is below our dance studio.

Farmhouse
Built in: 1872
Official initials: FH
Upgraded in: 1995
Named after: The camp's central building dating back to HVC's agricultural days.

Fiddlers Green
Built in: 1983
Upgraded in: 1998
Official initials: FG
Named after: An old Irish legend of a village of paradise that sailors searched for if their ship sank.

French Quarter
Built in: 1984
Upgraded in: 1984
Official initials: F/4
Named after: A=In honor of a group of campers from New Orleans.

Halley's Comet
Built in: 1984
Upgraded in: 2004
Official Initials: HC
Named after: For years this cabin was called “Brumby” in honor of the wild horses of Australia and in fact this building is sometimes the home of our Brumby campers, with a new name inspired by the many stars visible from the top of Brumby Hill and for Comet, a famous race horse.

Lower Carriage House
Built in: 18??
Upgraded in: 2000
Official Initials: LCH
Named after: It really is a carriage house from Hidden Valley's days as a farm.

Log Cabin
Built in: 1977
Upgraded in: Continually
Official initials: HVA (For 2022, Adventure campers will live in Chateau Fiasco.)
Named after: Duh, 'cause it's made of bricks?!

Loons
Built in: 1958
Upgraded in: 2003
Official initials: L
Named after: Officially "The Loons" after the Maine State bird, not the crazy cabin inhabitants!

PD Barn
Built in: ????
Official initials: PD
Named after: The Program Directors who inhabit the building during the summer.

Ritz Up
Built in: 1983
Upgraded in: 1997
Official initials: RU
Named after: The famous hotel; just don't expect room service in this one.

Shangri-La
Built in: 1987
Upgraded in: 2000
Official initials: SL
Named after: Shangri-La is an imaginary utopia in Far Eastern China, a place of permanent happiness

Taj Mahal
Built in: 1982
Upgraded in: 2005
Official initials: TM
Named after: As the camp's largest cabin, why not a grand namesake?!

Valhalla
Built in: 1983
Upgraded in: 2001
Official initials: VA
Named after: A Norwegian Legend where Valhalla is a big and majestic hall that soldiers travel to in the glorious afterlife to join fellow soldiers and past kings.

Muskingum
Built in: 2000
Official initials: MU
Named after: Muskingum was the word used by local indigenous people to describe a nearby hunting ground. It means "deer eyes."

Wombles
Built in: 2019
Upgraded in: 2019
Official initials: W
Named after: "Underground, Overground, Wombling free. The Wombles of Wimbledon Common are we. Making good use of the things that we find. Things that the everyday folks leave behind." Named after imaginary creatures in British children's literature. Wombles live in burrows on Wimbledon Common and rummage in garbage and recycle all that they find into ingenious new inventions. 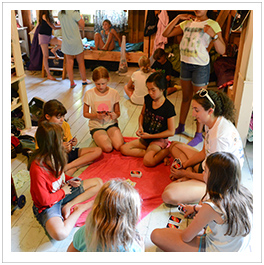 Atlantis: Formerly named Last Resorts. Atlantis was not named at all until 1983!

Avalon: Avalon is right in the backyard behind the swing set and tetherball.

Bermuda Triangle: So named because you can't find the photo here. Sometimes we combine adjoining Atlantis and Treasure Island to form a larger "Bermuda" group.

Blue Moon: It's the closest cabin to both the lake and the ropes course. Lucky, lucky.

Halley's Comet: This cabin houses our horse-crazy Brumby campers, and its great view has us thinking about the night sky here.

The Burrow: Formally Ritz Up: Can you guess why? Tiny hint: It’s upstairs from Ritz Down.

Camelot: Has a great campfire site nearby. S’mores anyone? 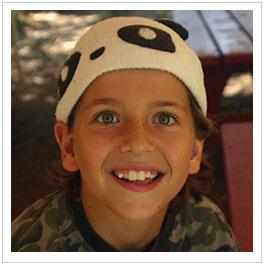 Deer Meadows: Used by HV Alive during the August Session. Has a kitchen!

Down Under: Right by the stream, perfect for cool afternoon creek walks.

Farmhouse: The Kassen's home! The farmhouse used to sit atop Tipi Hill and in the early 1900's was rolled down the hill on logs and pulled by oxen to its final resting place in the center of camp.

Fiddlers Green: Is near the hoops court and you will occasionally find a camper crawling underneath to retrieve errant basketballs. 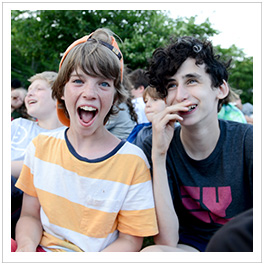 Forbidden Planet: Formerly the old Riding Cabin because it once housed our horse program participants.

French Quarter: The second largest cabin (Taj Mahal is the largest, of course) at HVC.

Gimme Shelter: Has a great addition on the side which is the home of many an exciting poker game.

Loons: Peter's favorite cabin because it's so roomy. 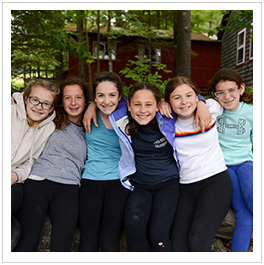 Paquatahnee (pronounced pa-kwa-TAH-nee): Has a beautiful stained glass window of a waterfall made by Wandrea.

PD Barn: The PD barn was a dairy barn until renovated in the 1950's.

Ritz Down: Can be used as a winter dwelling, and has a dance studio next door!

Shangri-La: Used to be named “Utopia” but a real utopia is better than a generic one, right?

Taj Mahal: HVC's largest cabin, and the only cabin without an identifying sign.

Valhalla: During a blizzard, a huge oak tree leaned against this cabin and it took a whole weekend to cut it down!