About 12,000 years ago, the first humans migrated here. These Native American tribes, including the Penobscot and Wawenok who lived in our coastal area, formed the Wabanaki confederacy. The Wabanaki – meaning “people of the dawnland” – created semi-permanent settlements and lived off of abundant wildlife. One significant hunting ground was about 2-3 miles down the road that comes through HVC. This road was a significant native trading route.

Colonists arrived about 400 years ago and violently displaced the native people. They created towns and farms in the areas they cleared, including those in mid-coast Maine. Hidden Valley’s secluded 350+ acres supported homesteads similar to those still common to northern New England. "Old-timers" passing through tell us stories about their childhood walks to and from school, picking up fresh milk on the front steps of our farmhouse on the way home. 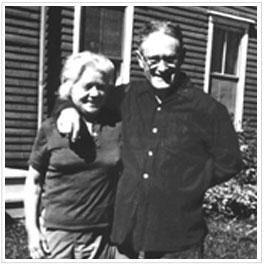 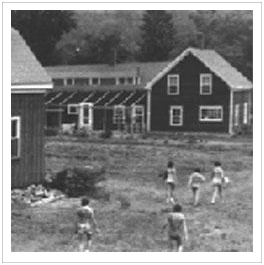 In 1948, Hidden Valley started out as a work and farm camp for twelve teenaged campers. This small group and their directors (and the founders of Hidden Valley) Hal and Dean Tiffany, converted a manure filled dairy barn into living and eating space. This Red Barn later became our first dining hall and is now a community center with a library, fireplace, video studio and game area.

These pioneering campers also constructed new buildings to provide living space. These structures — with names like The Loons, Tasker Hall, and the Buckhorn — now host programs such as dance and batik. Testimonials on this page describe camp life in those early days.

At its height, this incarnation of Hidden Valley hosted 75 campers. In 1964, the Tiffanys decided to retire — the responsibilities of caring for such a "large" camp having caught up with them — and put the camp up for sale. They began to spend summers in a cottage which has since become the camp office. 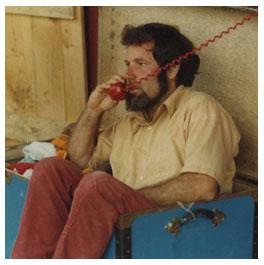 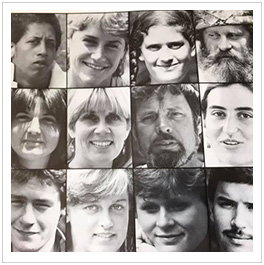 In 1969, Jay Stager purchased the camp. In those days, the camp hosted 90 campers, among them Peter and his brothers. Jay's ideal of an interracial, non-denominational, non-competitive camp was visionary and quite successful. Over time during the 70's and 80's, campers moved out of the barn and into cabins which now house over 200 children.

Jay also established camping's first and only llama herd. His time is also known for its pioneering and inspired internationalism - beginning our tradition of hosting staff and campers from every continent - and the introduction of many new art forms to the HVC program.

To set the stage for the next phase of camp history, we need to go back in time. Though most of the Tasker farm had been sold to the Tiffanys, a "small" (80 acre) piece remained with the Taskers until 1956 when they sold it to then HVC parents Jerome and Irene Cossman. The Cossmans converted this piece into their summer estate, building additional buildings and a swimming pool. 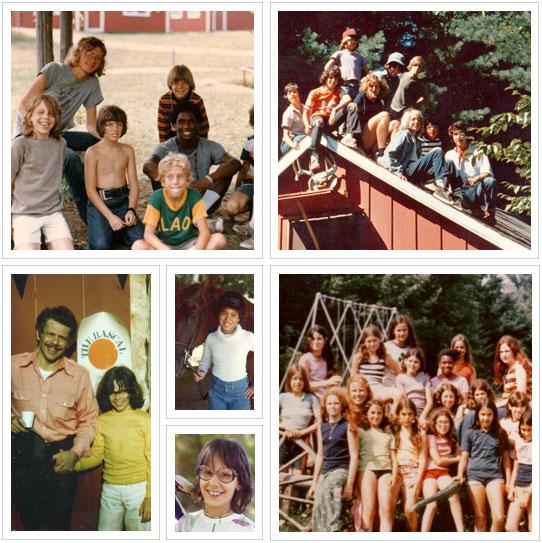 Meanwhile, Peter and Meg met at nearby Med-O-Lark Camp which they directed from 1979 to '86. Married in 1985, the Kassens took over at Hidden Valley when Jay and his wife Karen retired. Later, HVC's neighbors the Cossmans moved closer to the Maine coast; Meg and Peter purchased the last of the Tasker farm, reuniting it with the rest of the camp and converting the Cossman's Deer Meadows estate to camper use.

In addition to shepherding the physical growth of the camp, Peter and Meg have moved the camp community forward, expanding HVC’s commitment to the arts, introducing a host of staff training opportunities, developing teen programs, broadening Hidden Valley's idea of diversity, and deepening the camp’s focus on cabin and community life. We also look back, with camp programs and summer conversations educating staff and campers about the indigenous roots on HVC's 350 acres. Read our land acknowledgement. 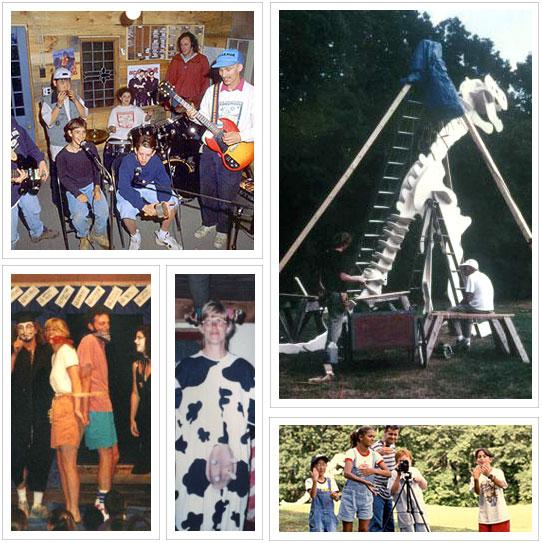 Jay Stager passed away in 2016 after a career in which he revitalized and/or directed five Maine camps. After many years in nearby Lincolnville, Irene and Jerome Cossman have passed as well. And the Tiffanys' ashes are scattered at the top of Tipi Hill near two Maine white pine trees. All of HVC's founders are memorialized in Founders Park, the site of the Tiffanys original cabin, next to camp's office. 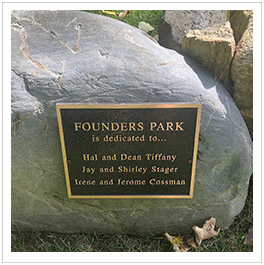 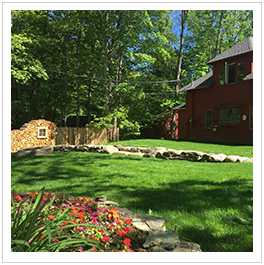 In 2017, Jay was honored posthumously for his pioneering efforts to enrich camp communities through the participation of international staff and campers. At the same conference, the American Camp Association New England recognized Peter's achievements in educating the camping movement about inclusion of transgender participants.

Watch reunion video and click here to learn more about our next gathering. 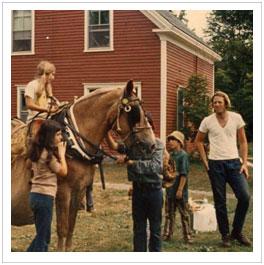 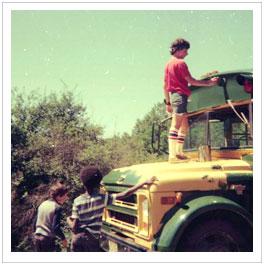 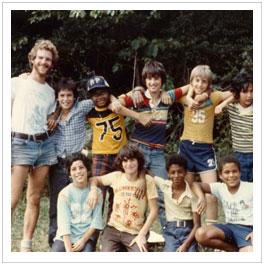 Guess the name of this counselor! 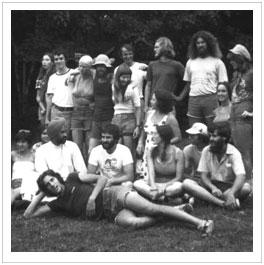 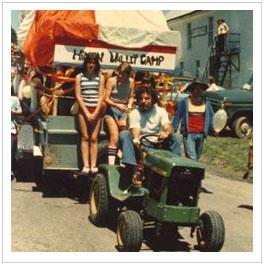 A HVC float in Montville parade. 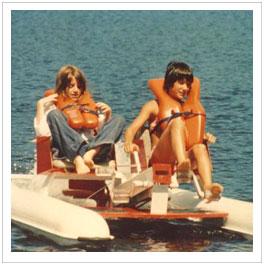 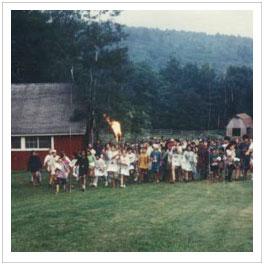 What Past Campers Say

Every Sunday morning, there was an all camp softball game and everyone played. Thirty people out in the field. Thirty in the batting order... The field by the Carriage House almost all the way to the top was corn, and as it ripened we had to sleep in the corn field to be sure that the porcupines would not get the corn...

I went into teaching because of Hal and he influenced me perhaps more than any other person I know. He created an environment that was accepting, honest and one in which each person was made to feel good about him/herself and proud to be part of the community.

There were fifty campers and 10 on staff. All of the girls lived in the Barn and the boys lived in three cabins: Carriage House, Crows Nest, and the Buckhorn.

Are you an HVC Alumni? If so, get in touch with us to stay up to date!

Can you guess who these people are? We'll give you a hint...They can still be seen around camp during the summer. 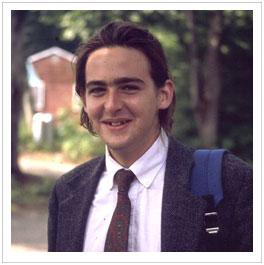 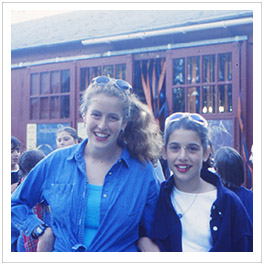 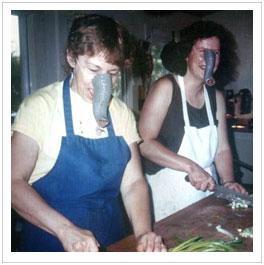 Read All About It!

Links and documents with HVC history...

• The Abbe Museum in Bar Harbor (Maine's only Smithsonian affiliate) is devoted to Wabanaki history and culture.

• Here's a letter from the folks who lived in the valley in the 40's before HVC was a camp. An amazing description of the challenges of rural life before modern conveniences arrived in this part of the world.

• Read the poem "Ledge Pond" inspired by our lake and published in 1971 in The New Yorker.