Hidden Valley can support almost all allergy-related diets at camp.
We encourage you to call or email us to discuss your particular situation.

Serving Families for Many Years

Peter Kassen, co-owner and co-director with wife, Meg, of Hidden Valley Camp in Maine, says that about 5 to 10 percent of their 280 campers are on some sort of special diet. And the numbers seem to rise each year. Lactose intolerance, wheat and nut allergies are the most common, Kassen states. In response, he, Meg and their kitchen crew, who have run the dining hall for the past 20 years, got themselves up to speed by researching information on food allergies, talking to families of their campers, seeking out formal training and creating separate preparation and serving areas for specific foods.

Kassen doesn't believe kids on special diets at his camp feel singled out in any negative way. "There are enough now that they're not the only ones eating some different foods.... And a lot of what goes on here is a reflection of the philosophy of the camp, which sees everyone as an individual. If you follow that in all of your operations, it's pretty easy to do in the dining hall, too."

Campers also learn confidence, says Lori, whose son Dan, now 17, and daughter Hannah, 14, spent several summers at Hidden Valley Camp. Dan had a host of severe food allergies when he started attending camp, which have diminished and now only include nuts and seafood. "In a way, it's a great experience. They learn, 'Wow, I can eat away from home.' That's very positive."

Yet camp presents parents with understandable concerns. Lori says her main worry when her son first went off to camp -- with an Epi-pen, as always -- was that "he'd inadvertently eat something he shouldn't." But visiting the camp kitchen, noting its cleanliness and organization and talking with the head chef, who even asked her for some recipe suggestions, helped Lori rest assured "that food wouldn't inadvertently be mixed up. Seeing that gave me some piece of mind."

Peter Kassen, co-owner and co-director of Hidden Valley Camp in Maine, encourages parents to educate their kids. "Find out from us what's on the menu and then walk through it, teaching your child how to make concrete decisions about what to eat. Ask 'If you saw this, this and this, what kinds of choices would you make?'”

Hidden Valley parent Lori says that she wrote a long and detailed memo to the camp's chef about her son's food allergies and his reactions. In the early years of his camp career when his allergies were more severe, he'd go and see the chef before meals and the chef would advise him what he could and couldn't eat on the day’s menu.

The Food Allergy and Anaphylaxis Network recommends that campers know what foods are safe and unsafe for them to eat; have strategies in mind for avoiding unsafe foods; recognize symptoms of allergic reactions; know how and when to tell an adult about a possible reaction; know how to read food labels, including on items that might be available in the camp commissary and how to self-administer epinephrine or other necessary medications.

As with anything else, says Kassen, "Families need to prepare a child to establish an independent identity, and we're here to provide that support."

The food was delicious, and the kitchen staff were very accommodating of my food allergies. Lillian always made sure there was something safe for me to eat.
- HVC Camper

It's clear from her happy account of her summer (and rave reviews of the vegan chocolate chip cookies, cheeseless pizza and other delights) that the staff did an extraordinary job of making her feel safe and comfortable and extremely well fed. We know how much sensitivity and dedication that takes and are truly impressed. It meant so much to her and us that she could go away to camp.
- HVC Parent

Everyone contributes to helping HVC children adjust successfully to camp; this is especially true when a family lets us know about allergy challenges.

Here is a little bit about what we do to support special food and allergy diets at HVC:

WE ALL PITCH IN PRE-CAMP:

IN THE SUMMER KITCHEN…

…AND THE DINING HALL: 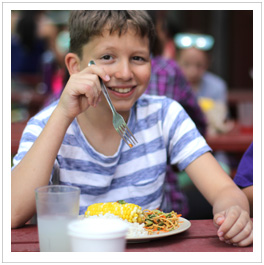